The addition of these new Winter destinations means that all six will now be served from Liverpool all year round bringing greater choice for the region’s travellers.

The new services will bring additional weekly departures during the Winter season with the Airport expecting a 7% increase in Ryanair passenger numbers for the period compared to Winter 2015/16.

In total, Ryanair will now feature 24 Winter destinations from Liverpool with 93 weekly flights, offering a great mix of sun and city break destinations.

Mark Povall, Director of Air Service Development at Liverpool John Lennon Airport added, "We expect that these new Winter services will bring a 7% increase in Ryanair passenger numbers at Liverpool next Winter, as well as bringing increased choice with year round access to all six of these destinations."

Ryanair’s Head of Communications, Robin Kiely said, “We are pleased to launch our Liverpool Winter 2016 schedule, which includes a new route to Sofia, 5 new Winter services to Bergerac, Gran Canaria, Pisa, Porto and Szczecin, and more flights to Alicante and Malaga, making Ryanair the ideal choice for sun and city break getaways. Our 24 Winter routes (and 28 Summer services) will help deliver 1.9 million customers this year and support 1,400 “on-site” jobs at Liverpool Airport.”

To celebrate the launch of the airline’s Liverpool Winter 2016 schedule, Ryanair are releasing seats for sale from just £19.99, which are available for booking until Thursday (14th April) for travel in May and June and can be booked on www.ryanair.com 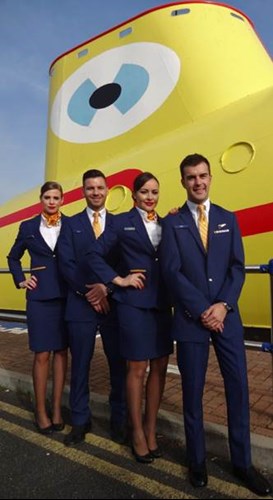 Ryanair cabin crew based at LJLA celebrate today’s Winter schedule launch, proudly wearing their new Ryanair uniforms that are currently being introduced across all their operations, in front of the Airport’s famous Yellow Submarine.