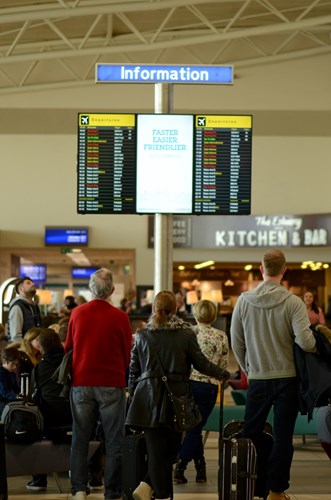 It is likely to be Liverpool John Lennon Airport’s (LJLA) busiest weekend of the year as the August Bank Holiday getaway begins once again on Friday, with around 70,000 travellers expected to pass through the Airport over the long weekend.

The majority of the region’s holidaymakers are likely to be heading off somewhere warmer from Liverpool, including the sunshine resorts on the Mediterranean as passengers take advantage of the wider choice of holiday destinations available from LJLA. Weekend breaks are expected to be popular too with passengers travelling to various European cities and further afield to the likes of New York on Aer Lingus’ North American flights via Dublin.

This year has seen two new operators commence services from Liverpool with Spanish airline Vueling flying to Barcelona three times a week and the start of the TUI weekly flight to Palma.

Bookings with TUI from Liverpool have sold so well, that the tour operator announced earlier this year that it will be expanding its Liverpool programme for Summer 2017, by adding a further weekly departure to Palma, in addition to new weekly services to Tenerife and Ibiza, with flights for Summer 2017 already on sale.

In total, six new services have commenced this year, along with increased frequencies on a number of existing services too. Growth is expected to continue throughout 2016 with new routes to commence shortly, with Ryanair starting flights to Sofia in September and Marrakech in October.

Robin Tudor, Head of PR for Liverpool John Lennon Airport, commented: “It’s been our best Summer for many years in terms of passenger numbers and the August Bank Holiday weekend is set to be our busiest weekend of the year once again, with passengers from across the region taking advantage of the convenience of flying from Liverpool with even more great destinations now available.”

It's not too late to book your summer break, or why not consider some winter sun? Check out our Route Map or Destinations and Book Flights now!

Ryanair today announced another new route from LJLA with a twice weekly service to Bari in southern Italy.