Liverpool John Lennon Airport today commissioned their new $1million, ‘state of the art’ Oshkosh Striker rescue and fire fighting vehicle and gave employees the chance to see its capabilities with a demonstration at the Airport’s Fire training rig.

Built in the US specifically for the Airport by specialist vehicle manufacturer Oshkosh Corporation, the 42 tonne airport fire appliance was shipped over to Liverpool earlier this year and has been undergoing testing and fire crew familiarisation ahead of coming into service.

The high tech vehicle is capable of 0 – 50 mph in 35 seconds, carries 12,000 litres of water and can disperse this a distance of over 90 metres, emptying its tank in under 2 minutes.

It is also equipped with a High Reach Extendable Turret (HRET), which allows the Airport fire crews to carry out firefighting whilst operating the HRET inside the appliance cab, without the crews initially being within the risk area, viewing all operations through both a colour camera and a Forward Looking Infrared Camera (FLIR).

The Striker also has a unique feature with its ‘Snozzle’ that allows crews to pierce through an aircraft skin and deploy water and foam, extinguishing any internal fires.

Neil Gyllenship, Fire Service Manager for LJLA commented, “The Airport continues to demonstrate further investment into the safety of its passengers and employees with this vehicle which further enhances the Airport’s fire and rescue capability.

This is the latest generation of Airport fire and rescue equipment currently available and is faster, more economical and more efficient than many other fire and rescue vehicles.” 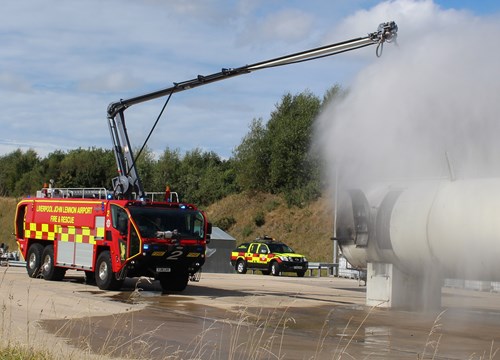