Laudamotion to become LJLA's newest airline with flights to Vienna

Flights will commence on 28th October 2019 operating at convenient flight times on Mondays and Fridays using Airbus A320 aircraft.

Laudamotion has bases in Vienna, Innsbruck, Stuttgart, Dusseldorf and Palma and currently only operate to London Stansted in the UK.

This is LJLA’s first scheduled service to Vienna and is the latest new destination to be served direct from the North West’s faster, easier, friendlier airport. It will be the third new airline to be announced in Liverpool during the last 9 months.

Bookings can now be made on www.laudamotion.com with fares starting from just €19.99 one way.

Paul Winfield, Director of Aviation Development for LJLA commented, “For Laudamotion to choose Liverpool to be their first UK regional airport to operate from, is a tremendous achievement for the Airport and shows how attractive operating from here is becoming for some of Europe’s top airline’s.

Vienna is another new destination to be served from Liverpool and we expect this to be popular with both the leisure traveller and the region’s business community.”

Andreas Gruber, Managing Director of Laudamotion added, “Our routes work because we have the right offer for price-sensitive customers. In particular, with our new City Shuttle routes, I'm sure to increase the traffic with our new non-stop service to and from Vienna.”

To celebrate its first birthday, Laudamotion is offering an exclusive discount for today only. Travelers who book a flight on laudamotion.com get a 5 Euro voucher – for each person and booked flight.

Laudamotion will operate an A320 aircraft on the new Liverpool to Vienna service. 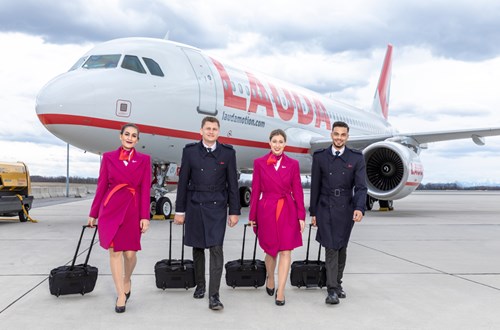 2018 was another successful year for Liverpool John Lennon Airport (LJLA) and the cause for a double celebration with the Airport’s latest passenger figures showing a milestone in passenger throughput, at the same time as having the UK’s best scheduled flight punctuality record.

Passenger numbers at Liverpool John Lennon Airport (LJLA) continue to grow at the start of the winter season, with a rise of 5% in October compared to October 2017, with many passengers and families taking advantage of the choice of flights to some great overseas destinations during the school half term.