Gateway for the North West and North Wales

LJLA is the perfect gateway for the North West and North Wales not only offering rail access for passengers from across the region to fly out to a host of destinations, but also for visitors arriving from overseas to travel on to the Liverpool City Region, Cheshire, Lancashire, Greater Manchester, Cumbria and North Wales and their many tourist destinations.

Getting to and from Liverpool John Lennon Airport by Public Transport

If you're travelling to or from Liverpool John Lennon Airport by rail, you'll be able to find an abundance of information on Merseytravel's website

Using the Merseytravel Journey Planner you can quickly establish how best to get to and from Liverpool John Lennon Airport by bus, train or ferry. You can also download this from the Apple App Store or Google Play to enable you to stay informed whilst on the move.

Alternatively, you can call Merseytravel Customer Service on 0151 330 1000 for travel advice between the hours of 7am-6pm Monday to Friday and 8am-5:30pm on Saturday, Sunday and Bank Holidays. For more options on how to get in touch with Merseytravel, please click here.

MetroCard is a contactless smartcard for public transport tickets. You can buy a smartcard and your first ticket at any PayPoint retailer, Merseytravel Centre, on board an Arriva or Stagecoach bus or at any rail station across the region. Find more information here.

Liverpool South Parkway is the closest rail station to Liverpool John Lennon Airport and is located approximately 3 miles from the airport itself. Transport is available between the airport and the rail station via the 80A and 86A bus services which operate up to every 20 mins. For bus timetables, please click here

The station is also easily accessible from elsewhere in the country and has direct rail links to Warrington, Cheshire, Manchester, Yorkshire, East Midlands, West Midlands, East Anglia and connections to London Euston services at Runcorn or Crewe.

The opening of the Halton Curve line in 2019 has also greatly improved public transport access between the Airport, North West Cheshire and North Wales, with direct services between Chester and Liverpool South Parkway, and one-change services from Llandudno Junction, Shrewsbury and Wrexham General. 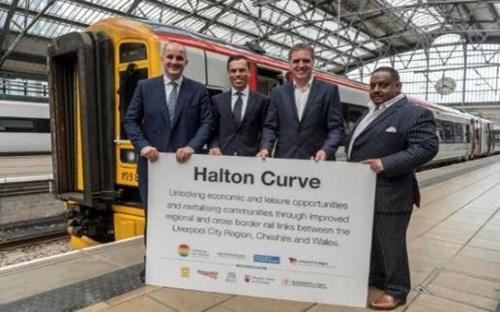 Merseyrail – for services between Southport and Liverpool South Parkway

Northern – for services between Manchester, Warrington and Liverpool South Parkway

Liverpool Lime Street Station is located 7 miles from Liverpool John Lennon Airport and has great connections to all of the UK's main rail networks and connections onwards to the airport.

Rail connections are available from Liverpool Lime Street Station to Liverpool South Parkway with onward bus connections to the Airport.

Liverpool Central train station is in the heart of the city centre with Merseyrail services to Liverpool South Parkway and onward bus connections to the Airport.

Regular Arriva bus services 89 and 81A operate between Hunts Cross Rail Station and the Airport.

To make your journey to the airport even more seamless we have worked with partners to introduce new through tickets with “add on” tickets available to Liverpool John Lennon Airport from anywhere on the rail network via Liverpool South Parkway and the 80A and 86A bus services.

If you are arriving at Liverpool John Lennon Airport via public transport you might want to allow extra time to enjoy the various shops, bars and restaurants in the Departure lounge once you are through security. You could book a Fast Track security ticket to avoid any queues or even treat yourself to a pass for our exclusive Aspire premium lounge.